Homozygosity of the 10-repeat allele at SLC6A3 is associated with a poor response to methylphenidate in a Brazilian sample.
In Brazilian boys with ADHD, there is a negative association between response (both on ADHD symptom remission as wel as glopbal functioning) to methylphenidate and homozygosity for the 10-repeat allele of the SLC6A3 gene. 75% (15/20) of the boys without 10/10 demonstrated an improvement higher than 50% in the 10-item
Conners Abbreviated Rating Scale while only 47% (14/30) of the subjects with the SLC6A3 10-repeat allele (10/10) achieved the same level of improvement (Fisher’s exact test; one-tailed P = 0.04).

N = 50 boys, 30 homozygotes for the SLC6A3 10-repeat allele (10/10) and 20 with other genotypes. All boys were diagnosed and treated at the ADHD outpatient clinic at the Child and Adolescent Psychiatric Division of Hospital de Clínicas (HCPA) in Porto Alegre, Brazil. 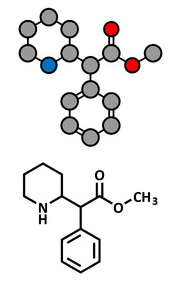